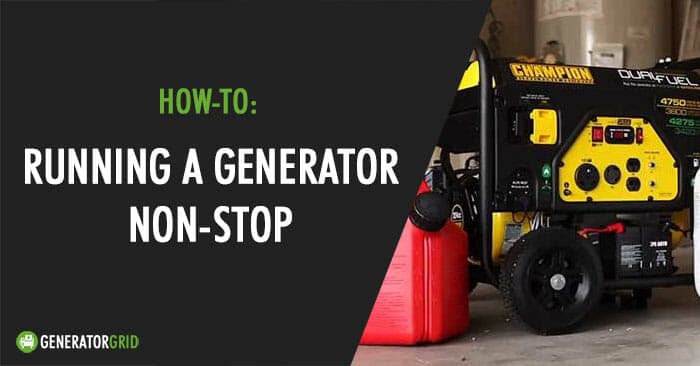 Have you wondered if you can run your portable generator non-stop? That’s a fair question. Portable generators are a fantastic tool to have during a power outage or in areas where electrical service and weather conditions may be iffy.

Can you run a portable generator continuously?

Yes, portable generators can run continuously as long as proper maintenance intervals are given; since gasoline is highly flammable, you’ll want to stop the engine before fueling or refueling any generator.

Additionally, it is important to pay attention to the recommended maintenance schedule for your unit and avoid ever letting it run out of fuel entirely while it is under any load; this could destroy the connected appliances or the generator itself.

Keep in mind, this is a pretty basic answer. To ensure that you’re running your generator properly, there are some other things you’ll need to know.

Let’s go over how exactly to get the most out of your portable generator and what you should be aware of before you run it continuously. 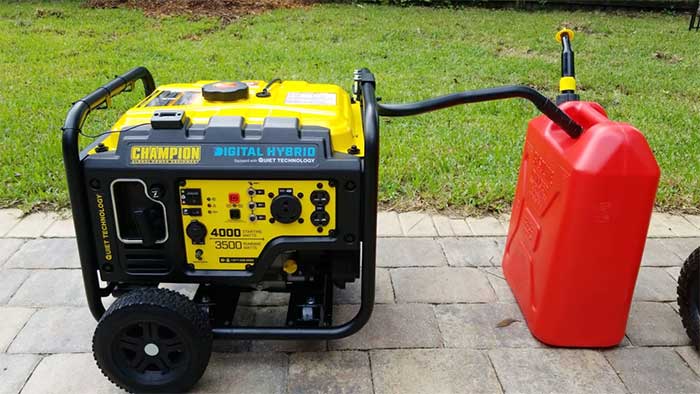 Generally, portable generators are meant to be used as a backup source of power.

This means that almost all of them should only be relied on in the short-term.

While some models have been manufactured to provide power for days at a time, most generators can be run for 8-, 12-, or 24-hour intervals–with a few boasting 72-hours running times.

However, it’s important to know that there aren’t any portable generators out there that should be run for weeks or months at a time without a break. There are a few other universal truths to these hardworking machines.

Whether you’re using gasoline or propane, you’ll need to give them something to sip on. Even the most fuel-efficient machines can’t run forever without a power source.

Secondly, refueling your generator while it’s on is a bad idea.

This means you’ll have to shut your portable generator off while you refuel it.

So, regardless of your generator’s running time, if it uses up all of the fuel, you’ll have to shut it off for a bit while you feed it.

Why do you have to shut off your generator when you refuel it? 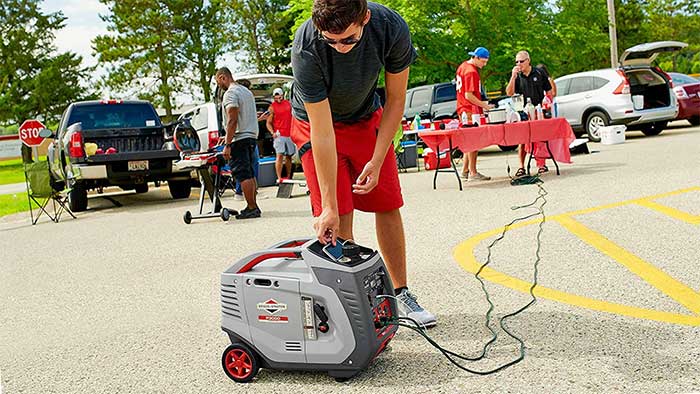 You may be wondering why you can’t just refuel your portable generator while it’s still running.

I’d counter that with another question: Have you ever put gas in your car without shutting it off?

To be honest, I have. Living in the frigid northern recesses of the United States sometimes necessitates this.

However, that does not mean it is a good idea. Gasoline is highly flammable.

The hotter your engine is, the more likely you are to ignite something accidentally. Now, gasoline itself isn’t flammable in its liquid form.

You can actually throw a match into a bucket of gasoline if there are no fumes present.

Here’s an article about that from the CCOHS, though I believe the article is recommending that you don’t try that.

The article states that “flammable and combustible liquids themselves do not burn. It is the mixture of their vapors and air that burns.”

So, the real danger comes in with fumes that gasoline releases into the air.

A single spark can ignite gasoline fumes in an instant. This is known as the flashpoint. So if your generator is running low, or “running on fumes,” you want to be careful when refueling. Ergo, you’ll need to shut it off.

How long is the average generator run time?

The most popular portable generator, the Honda EU2200i, gets 8 hours of run time on just about 1 gallon of gas. Your run time will depend on the efficiency of your generator, it’s wattage rating, and the sustained load being drawn from it. A 5,000 watt generator will consume more gas per gallon then most 2,000 watt generators.

How Much Fuel Does Your Gas Generator Hold?

Now that you know why you’ll want to shut your gas generator off when you refuel it, you’ll probably want to consider how much fuel your tank can hold. Most portable gas generators can hold anywhere from 1 to 10 gallons of fuel at a time. A decent gas-powered generator can get anywhere from 10 to 13 hours of run time per tank of gas.

A standard 5,000-watt generator will use around 18 gallons of gasoline during a 24-hour period. If your 8-gallon tank gives you 13 hours of run time, you’ll have to stop and refuel it, say, in the morning and in the evening.

This isn’t too bad, all things considered.

It can be run for around 13 hours at a time on each tank of gas. It’s an all-purpose option that can be used in various scenarios. Plus, it runs on propane. We’ll get into that next.

How long can I run a Dual-Fuel or Propane Generator? 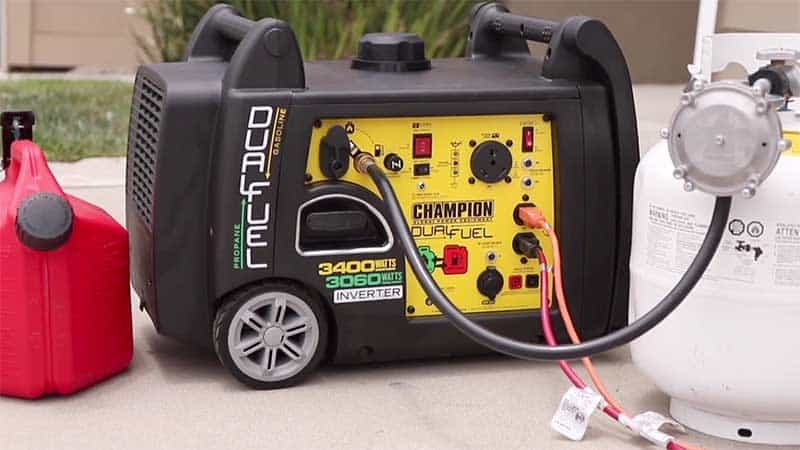 Most large propane tanks, either above or below ground, hold 500 to 1,000 gallons.

Standard propane tanks you find outside your local grocery store are 20lbs and contain 4.5 gallons of propane and weigh about 37 pounds when full.

Expect a propane-powered generator to burn 2-3 gallons an hour.

That being said, your portable propane or dual-fuel generator should still be given rest periods if mandated in your user manual.

Just because you can do something doesn’t necessarily mean that you ought to.

I love the dual-fuel DuroMax XP12000EH as a solid affordable over 10,000-Watt dual fuel generator. If I was buying a propane generator for the first time, this would be my pick.

Since propane burns really clean, you won’t have to worry about harmful residue clogging your carburetor. It is also pretty darn efficient.

There’s a lot of debate about whether propane or gas generators are better for long-term continuous usage. We will take a look at that next.

Gas vs. Propane Generators: Which Will Run Longer?

You may be wondering whether gas or propane is better. The answer is that both are good. It really depends on the situation that you’re in.

Gas generators are super efficient, easy to fix, and reliable. Gas is easy to obtain pretty much anywhere.

However, gas may also be expensive and is very flammable.

Also, gas tends to eventually cause all kinds of build-up in your generator’s engine.

You’ll have to clean your carburetor more often and remove any unused gas before storing your unit.

Consider this: almost all gas stations use electricity to power their gas pumps.

This means that in a city-wide power outage, you might not be able to get gas.

Plus, if you are storing your gas at home, you’ll need to have a fuel stabilizer.

Fuel stabilizers are additives that can prolong the lifespan of unused gasoline. (I recommend using Star Tron Enzyme Fuel Treatment for this.) 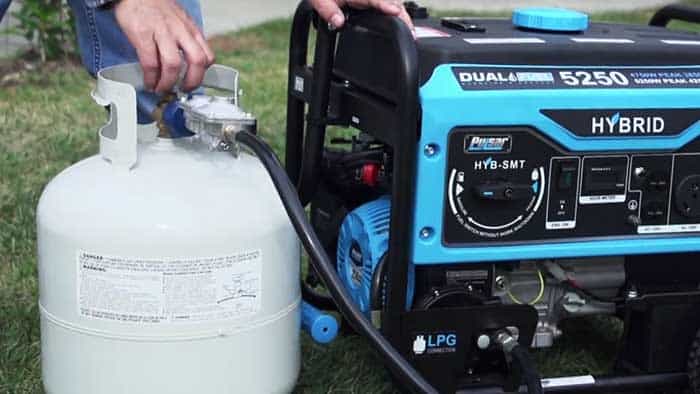 Propane comes in cylinders that are pretty much impossible to spill. When you do spill propane, it evaporates right away.

In an emergency situation, propane generators are great for power outages.

You don’t need any electricity to fill up a propane tank. Propane also has a really long shelf life.

You can pretty much store propane indefinitely without a fuel stabilizer of any kind. Plus, propane engines are usually quieter while running continuously than gas engines and propane is cheaper than gas for the most part.

That being said, propane engines are more complex than gas engines. This means that if they break, they’re pretty difficult to fix.

Another big problem is that propane isn’t nearly as efficient as gasoline.

You’ll run out of propane much faster if you’re running your generator all day.

Finally, propane is virtually useless in temperatures below 20 degrees Fahrenheit.

For Non-Stop Continuous Power: Get a Dual-Fuel Generator

If you’re trying to keep your generator running for as long as possible without stopping, you’ll want to get a dual-fuel generator with a well-built engine. This way, you’ll be prepared for whatever gets thrown at you.

For more information on dual-fuel inverters, read my post comparing the 10 most popular dual-fuel generators on the market.

It’s pretty quiet, easy to use, and reliable as heck. It also comes with pretty much everything that you need (minus the cover and the fuel) and makes oil changes easier.

Other Things to Consider When Trying to Run Your Generator Continuously

Before you use your portable generator for hours or days on end, you might want to consider that these machines aren’t really designed to be used this way.

If you’re going to run your unit like that, it will break eventually, even if you give it refueling breaks.

The longest I have ever used a portable generator continuously was for around a week.

Before you jump to any conclusions, what I mean is that I ran the thing just about every day whenever I needed power (mostly in the early evening and throughout the night).

If you really need continuous power, depending on your time frame, it may be cheaper to just get a legitimate non-portable standard generator. However, I understand why many people need the portable factor, too.

You can run your portable generator for a long time as long as you give it breaks to refuel and follow the guidelines in your user manual.

If you keep your generator under continuous load, it will eventually wear out.

That being said, many portable generators can go for a pretty long time and are surprisingly efficient.

I want to know what you think! Have any tips and tricks for running your generator around the clock?

How long have you kept your unit on? Feel free to share, leave your comments, or give your feedback!