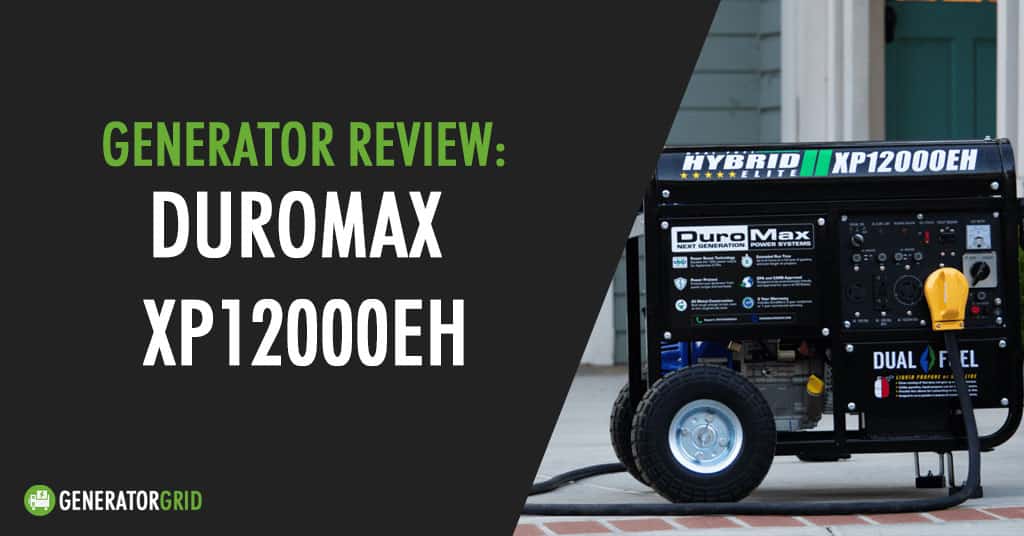 For those who are needing a larger generator, it is always best to buy a larger one than you think you need to cover any unexpected needs.

The Duromax XP12000EH that I am going to review today is a great example of having everything you could ever need in a generator in one easy-to-use machine.

This generator is perfect for powering multiple large appliances during a blackout, large tools on the job site, and can power most RVs and food trucks.

Let’s take a closer look at the DuroMax XP12000EH and all of its available features. 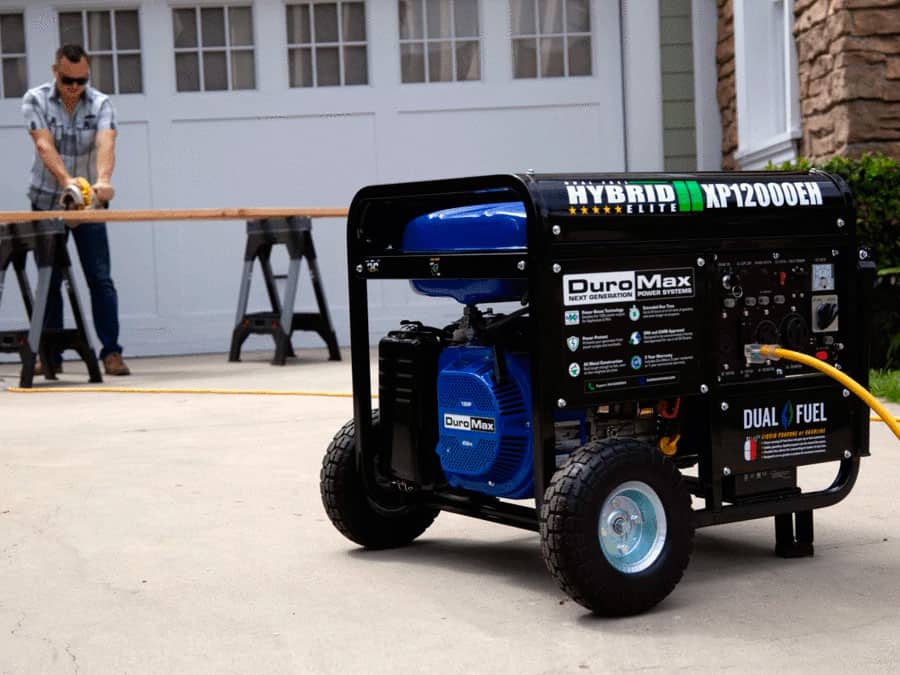 With 12,000 starting watts and 9,500 running watts, you will have no problem running all of the appliances or tools you need in most situations.

As a home backup generator, this generator will easily power many large appliances you may need to keep running, including furnaces and smaller A/C systems.

One of the biggest callouts for this DuroMax generator is the dual fuel capabilities.

Since this is a dual fuel generator, also known as a hybrid generator, you are able to use both gasoline or fuel to power the 18-horsepower, 457cc OHV engine.

There is also a non-hybrid, gasoline-only version of this generator called the XP12000E.

Power levels will vary depending on the fuel you use. With gasoline, you can expect 12,000 starting watts and 9,500 running watts.

This hybrid generator has many buttons and plugs that can be intimidating at first glance but is actually quite easy to use once you take a closer look at the main control board.

Not to mention, it features an electric key start to make it easy for just about anyone to start up this generator.

The outlet selection on the XP12000EH allows you to plug in a wide variety of appliances or tools into your generator to make full use of the 12,000-watt capacity.

Starting off, you will notice a single 120V 30A AC twist style plug which is great for larger appliances.

Next, you will see a duplex AC 120V 20A GFCI outlet set for plugging in any household electronics or common power tools.

You will also get a 120/240V 30A AC twist style plug for larger tools or appliances that need this specific plug.

Other great features of this generator are a voltmeter, idle control, and an array of LED indicator lights to help you monitor low oil and recharge.

At 260lbs, this generator is going to be on the heavier side, but Duromax has you covered.

They have built-in rubber tires and collapsible handles to make moving this generator a breeze.

With the 8.3-gallon fuel tank and 40-gallon suggested propane tank, you can expect run times of 8.83 hours on gasoline and 7.2 hours on propane when used at 50% load. 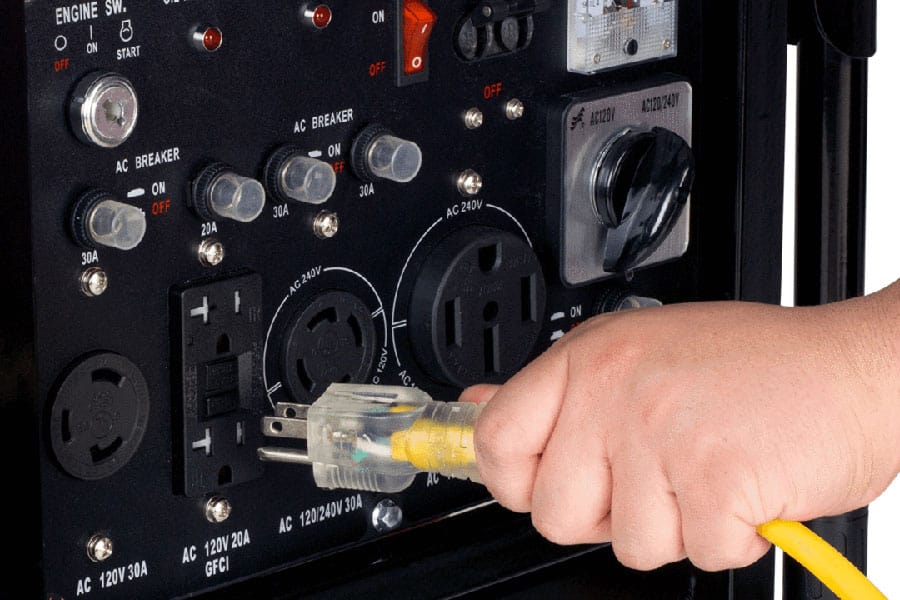 When choosing a portable generator, you will need to consider whether or not the noise level is going to be a factor in making your decision.

After all, if you are using your generator for camping or in a residential setting, you will want to make sure you are not disturbing others with a loud generator.

As an industry-standard, generator noise levels are measured in decibels and are noise readings are usually taken at 23 feet away from the generator.

Using this method, many generators operate at around 70-80 decibels, which is about as loud as a vacuum cleaner.

This Duromax generator is going to produce 74 decibels, which is pretty average for a generator of this size.

As a reference point, this is going to be about the same noise level as a hairdryer or a noisy restaurant. If this is the generator you want but the noise level may scare you, there are mufflers & silencers for generators you can check out.

This generator is going to be a perfect fit for those looking for a heavy-duty generator that can power multiple appliances or tools at once.

It is great for RVing and food truck applications but can be used as a home backup power source to ensure many of your appliances can stay running.

This generator is an inverter
A digital inverter module converts the raw power that is generated from DC to AC power. The inverter function means that you can use it to power sensitive appliances and electronics. 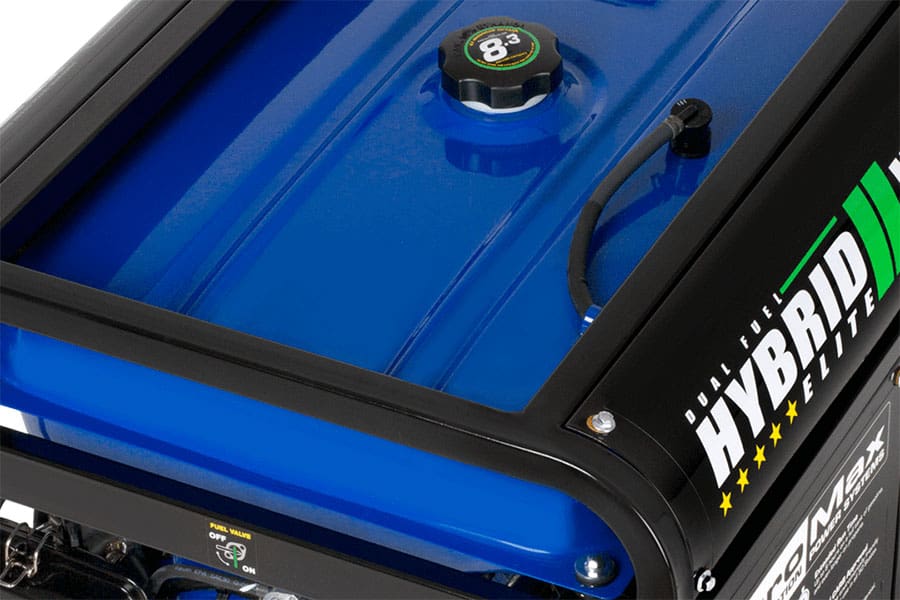 As a leader in the generator industry, you would not expect anything less than the best in Duromax’s warranty department.

Duromax offers a 3-year warranty on all generators that are being used for residential use only.

For those using them for commercial use, you can expect to still be covered with a 1-year warranty as well.

This warranty covers any defects in manufacturing or workmanship that prevent proper use of the generator.

With all of the specifics of the Duromax XP12000EH generator covered, it is time to see how it will stack up against the competition.

When comparing the Duromax to other generators, it is not easy to find one that matches the same power output while retaining the same hybrid functionalities.

However, the All Power America APGG12000GL goes toe to toe in both power and dual-fuel capability functions against the XP12000EH.

Both of these generators are going to give you peak starting watts of 12,000 watts on gasoline, but the Duromax generator edges out the All Power America by 500 additional running watts.

While these two generators are going to produce about the same noise level, the Duromax takes the lead at 74db compared to the 76db produced by the APGG12000GL.

Will this be a noticeable difference? Most likely not, but on paper, the Duromax will be quieter.

The power outlet selection is going to be close to the same on both of these generators as they both have an RV plug, twist-lock plugs, and household-style outlets.

This will come down to personal preference and what you need to plug into it.

It is the clash of the titans when comparing the two big generator brands Duromax and Westinghouse.

Both of these companies are well known for manufacturing top-tier portable generators with great features.

When it comes down to power ratings, these two generators are quite close on starting and running watts.

The Westinghouse Wgen9500 will take the lead as it offers 500 more starting watts than the XP12000EH generator.

The Westinghouse does not offer dual-fuel capabilities, so the Duromax does have that as an advantage.

Although it will most likely be hard to tell a difference if you were to put these two generators side by side for a test, the Westinghouse is rated one DB lower than the Duromax.

Much like All Power America, the Westinghouse is going to have two more household outlets than the Duromax and will be shy of one 120V twist lock plug.

This is once again going to be a personal preference, but the one thing that the Westinghouse does have that could be a huge plus is covered outlets.

This is great for dusty job sites or camping in dusty areas.

With over 100 reviews on Amazon at the time of this review, the XP12000E holds an impressive 4 out of 5-star rankings.

After taking a quick look at the less than stellar reviews, it seems that most problems people had occurred after unboxing, which should be fixed under warranty.

At the time of this review, there are no known issues or persistent problems with the Duromax XP12000EH.

While a few people have had problems right out of the box, this seems to be a common occurrence for many generators I have reviewed.

I am not saying it is a user error, but it seems to be many people have trouble with any type of generator straight out of the box.

Summary: Should you Buy it?

For those who are wanting a generator that can do just about anything and handle large wattage loads, this generator should definitely be on your radar.

With 12,000 starting watts, dual-fuel capabilities, and a great outlet selection, you shouldn’t need another generator for quite some time.

It is easy to use, easy to transport and is ready to take on just about anything you can throw at it.

I would suggest this generator to anyone who is able to afford one and is looking for an end-all solution for their portable generator needs. 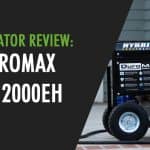