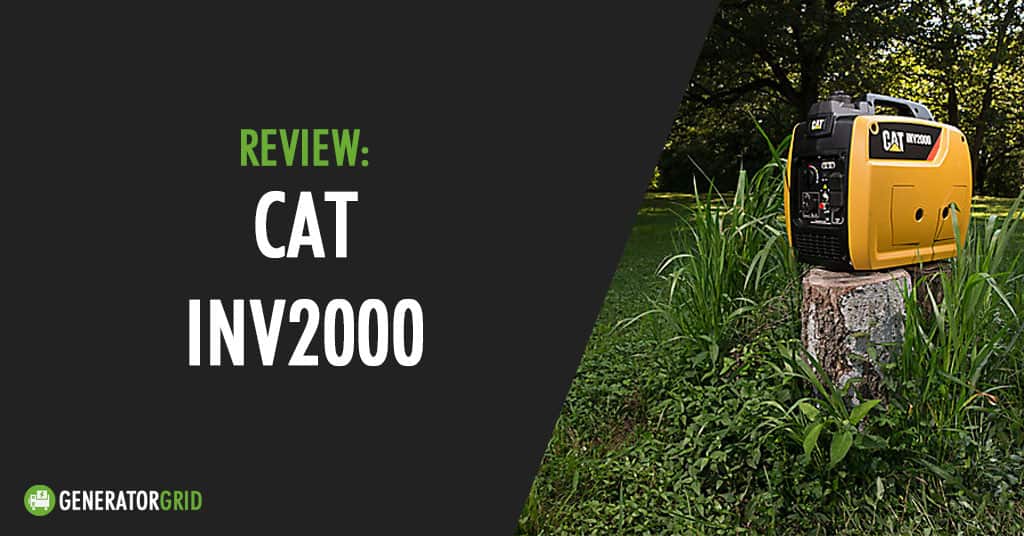 Today, we are going to take a look at the Cat INV2000, an 1800 running watt generator, and see exactly what makes it so special.

This generator is full of great features and I am going to look at each one of them so that you can make an informed buying decision at the end of this article.

2000 watts is enough to power most small appliances to get you through your next black out and can help charge up power tools on any job site.

For most people, there are going to be a few qualities that they are going to look for when choosing the perfect generator for their applications.

For residential use, you are going to want to find something that is easily portable, quiet, and has the type of outlets you need for what your application calls for.

Most of the time, you are going to want standard household outlets at the very least.

Like most portable generators, the CatINV2000 (click to read reviews on Amazon) is equipped with a standard recoil pull cord to start the generator.

A start/stop/choke switch is integrated to the main control plate to allow you easy access when it comes to operating your generator.

While an electric start would have been a nice addition, this is a feature I mainly see on larger generators. 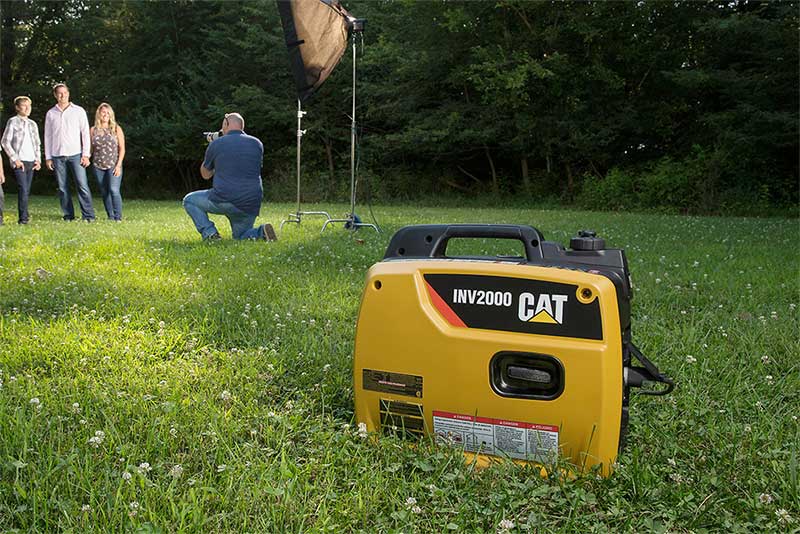 On the front of the generator, you will notice an easy to use control panel that is stuffed with features.

This makes it easy for you to find everything you need to use your generator all in one spot.

Since I have already mentioned the start switch, we can move on to the cluster below it that houses a trickle charge 12V dc port, an on/off switch for the charger, and a dual USB outlet that has an attached cover to keep the outlet protected from dirt and debris.

On the right side of the control panel, you will find a pair of household outlets that sport the same plastic type cover that the USB outlets have.

These outlets are 120 VAC and are GFCI protected. You will also find an on and off switch for these as well.

In between the USB and household outlets are receptacles for a parallel setup. This allows you to hook up another CAT INV2000 generator in parallel to the original one to get twice the power safely using two generators.

The parallel cord is sold separately and can be found here on Amazon.

Above this section is a switch for the ESC, Engine Smart Control, that allows your generator to run in a fuel efficiency mode to help reserve fuel and reduce noise levels.

Lastly, at the very top of the panel, you will see a series of 3 LED lights. This will include a low oil light, an overload light, and an OK light.

When it comes to using a portable generator in a residential setting, you are going to want to try to find something that is going to be quiet, or something that can be quieted down with a generator box or extended muffler.

As an industry standard, generator noise levels are measured in decibels and are noise readings are usually taken at 23 feet away from the generator.

Using this method, many generators operate at around 70-80 decibels, which is about as loud as a vacuum cleaner.

The CAT INV2000 operates at a very impressive 52-61 db rating which makes it one of the quietest generators on the market.

I would have no reservations of using this in any neighborhood as it should not be a nuisance for anyone near you. This would also make it a great generator to take camping with you. 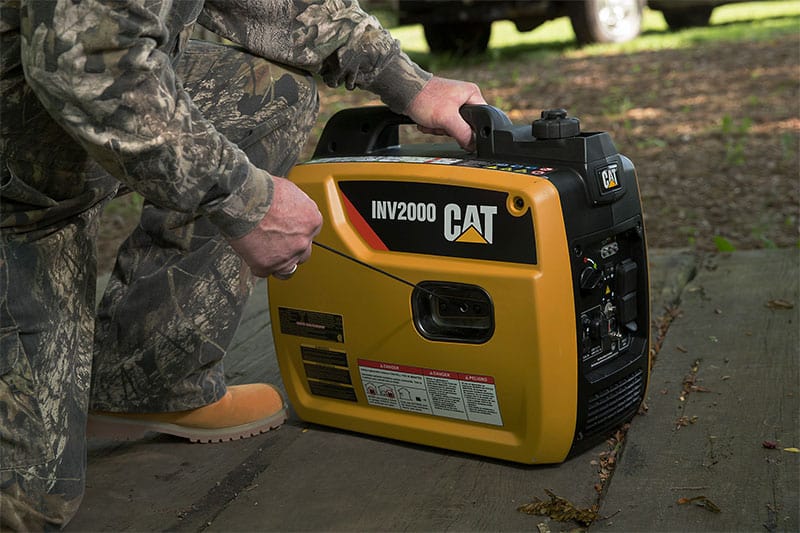 With having a smaller fuel tank of 1 gallon, I am impressed with the 6 hour run time at 50%. This should be more than enough to get you through a blackout or power a few tools where you need them.

At only 48.7 lbs and with an integrated handle, this generator isn’t one of the lightest on the market, but can still be moved by those who can lift around 50lbs with one hand.

This generator is an Inverter
A digital inverter module converts the raw power that is generated from DC to AC power. The inverter function means that you can use it to power sensitive appliances and electronics.

With the nature that you are using your generator for, you are going to want a generator whose company stands behind their product.

CAT is a worldwide industry leader in many different industries so it is not surprising that their generator warranties are above average.

On this CAR INV2000 generator, you will get a 2 year or 3 year limited warranty when registering your product within the 30 day post purchase window.

Looking through the owner’s manual, I was able to find a complete list of services and maintenance schedules to maintain this generator.

CAT was even nice enough to break down how to inspect/clean/replace many of the parts as well.

Now that I have talked about the INV2000 and the features that you can expect from it, let’s take a look at a few of its competitors and see how it stacks up against them.

As one of the most famous portable generators that we have reviewed in the past, the Honda EU2200i might be the perfect competitor for the CAT INV2000

Sporting almost identical power ratings, the CAT INV2000 barely beats out the EU2200i when it comes to peak power by a mere 50 watts.

This is not a huge difference, but 50 watts could be the difference between overloading your generator or not.

While the Honda generator can operate at levels as low at 48 db, with average use, these generators are going to be within the same range.

The good thing is that they are both great choices for quiet portable generators.

When it comes to power outlets, these generators are both going to have 2 household outlets and a 12V dc charger.

You will also find parallel capabilities with both as well which is a huge plus for smaller generators.

The biggest difference here is that the CAT generator is going to edge out the Honda with the addition of two USB outlets and covered outlets.

While the Generac 7117 isn’t the closest competitor when you initially look at the wattage levels, there are many other things to consider when comparing it to the CAT INV2000.

The CAT INV2000 is the clear winner surpassing the Generac by 100 running watts and 50 starting watts. While it’s not much of a difference, it can make all of the difference depending on the situation.

While Generac does not supply noise ratings for their generators, it is safe to say that the CAT is going to be hard to compete against with its low db numbers.

When it comes to the power outlet selection, you are going to get the same household outlets and parallel outlets on each generator.

The Generac falls short on USB offerings as it only has one compared to the pair on the CAT generator, but it makes up for it with a single 12V VDC outlet, something not found on the CAT.

However, on Lowes, I was able to find 16 customer ratings on this generator with an average rating of 4.1 out of 5 stars.

Most reviews rave about how the generator performed to their standards and that they are satisfied with their purchase.

At this time, there are not known issues with the CAT INV2000 and most of the reviews are positive.

The problems that I saw within customer reviews were very sporadic and most looked like they would be covered by CAT’s warranty.

My Opinion: Should You Buy It?

When choosing a generator that is the right fit for you, you really need to take into consideration what you are going to be using it for.

I see this generator being a great fit for the average homeowner who would like to keep a backup power source handy in the event of a blackout.

Also, those who like to camp could benefit from this generator as it is very quiet and can easily be transported.

Lastly, like other cat generators, it is built to be rugged and to prevent dirt from damaging outlets so I would not be afraid to use this generator on a construction site or in the field. 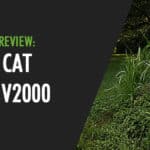